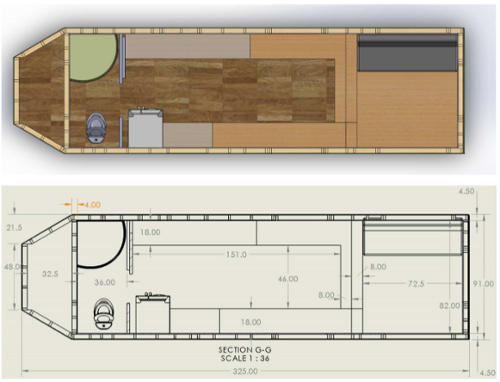 Conventionally, utilities such as electricity, heat, water, and pluming are major factors in designing a home that is not grid tied. The off-grid tiny house is no exception to this rule. In addition to the core principles of livable space are standards with respect to a home's structure including: insulation, structural integrity, durability, and configuration of living needs. Additional design restraints applicable to trailered tiny houses are: dimensional restraints for road use, smaller amounts of space, and durability to withstand additional forces such as sustained winds.

The design had to accommodate all the restraints and core principles for living while also providing additional comforts. To begin the physical designing of the house, a base set of dimensions were laid out. The student body making up the tiny house team was split into multiple sub groups with the task of designing a tiny house within a 24-foot-long by 90-inch-wide by 11-foot-tall rectangular prism. The dimensions are based off conventional tiny house trailer sizes with two feet subtracted from the maximum road height allowable to account for the trailer height. The positive elements of each of these designs were then used and a tournament style logic was implemented until there were two final designs. We took the two designs produced and identified the strong suits from each to form a single concise design. This design would later go through numerous alterations to accommodate knowledge gained along the way, but the core design stayed.

Featured above is the final design for the off-grid tiny house. The image shows the floor layout of the home which features a utility room on the neck of the trailer, a bathroom with a composting toilet and standing shower, a kitchen with roughly 8ft of counter space, a stove top and a 10cu ft. refrigerator. Beyond that is a raised area that functions as the living room and storage. The area is raised 18" with easy to access storage beneath. The door to the exterior is placed on the shoulder side of the road.